To commemorate twenty years since his passing, one of the UK’s renowned pop artists Stefan Knapp’s largest works entitled Flying 4* will be on exhibition and for sale at The Big Arts Show, near Guildford in September.

Current owners Eleanor and Jerome Shiveley have agreed with Knapp’s widow Cathy to release the 80ft x 14ft enamel mural from their private collection for its long awaited return to public viewing and eventual sale.

Following two years spent in a Siberian labour camp from the age of 18, then as a decorated RAF Spitfire pilot Stefan Knapp settled in England after the Second World War. He enrolled at the Central School of Arts and Crafts as well as the Slade, in London. Following graduation and with a vast personal store of visual images from his experiences the 1950s were very productive. His commissioned works including 17 murals for Heathrow Airport and one for Alexander’s department store in New Jersey, USA, which at the time was the largest in the world. The 1960s and 1970s continued that success and in 1977 he met Cathy. Following a period in France they eventually settled in Sandhills, where he produced many more of his trade mark large painted enamels. Some of his works of art may still be found on display at Surrey University and Farnham Art College.

The Big Arts Show was established by former Guildford resident David Dawkins in 2014. Co-locating to Surrey for the first time, 2016’s event will take place at Secretts of Milford, on September 10th and 11th. The Big Arts Show aims to provide a showcase for a wide diversity of artists using a range of formats and presentation through paint, sculpture, jewellery, glass, ceramics, furniture design, photography and performance art. The family-friendly event will include over 150 exhibitors, workshops and talks given by the artists, a real ale bar, eateries, poetry and live music.

Commenting on the offer of Stefan Knapp’s art for the show, which will also include another mural as well as Flying 4*, but for exhibition only, organiser David Dawkins said: “I originally approached Cathy to see if she would be kind enough to lend us a piece of Stefan’s art for the Surrey show, but to offer one for sale as well as a mural is simply fantastic. It is fitting that in this significant anniversary year, we can once again introduce the public and collectors to the important work of Stefan Knapp and in particular a work of art which hasn’t been seen for 20 years. I am very grateful to Cathy for her support and enthusiasm for our event.”

Cathy Knapp, who now runs The Mid Wales Arts Centre and has agreed to become a ‘friend’ of The Big Art Show, said: “Stefan was well-known in the local area when we lived in Surrey. His colourful character endeared him to people and in turn the friendships he made lasted a lifetime. I’m sure if he were alive now Stefan would wholeheartedly approve not only of The Big Arts Show but would be happy to see the work of fellow artists and performers exhibiting so close to home.”

For more information about exhibiting in 2016 phone 01694 771446, email: david@thebigartshow.co.uk or register online HERE.

Tickets for the event are £6.60 in advance, which includes a booking fee, and available to purchase online at www.wegottickets.com/thebigartshow. 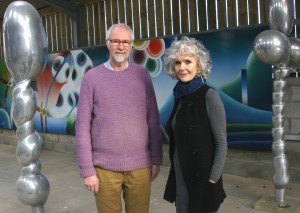 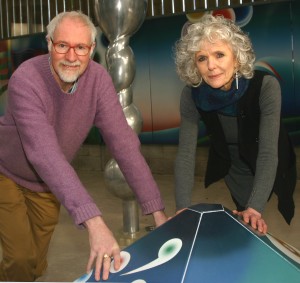 About The Big Arts Show
Established by David Dawkins in 2014 The Big Art Show aims to provide a showcase for a wide diversity of arts and artists, crafts and craftspeople, rarely seen together at a single event. Artists are offered an affordable space to exhibit, demonstrate and sell their work.

The Big Arts Show is for everyone with an interest in art and craft, from the student to the serious collector. Families are made very welcome. In response to public demand and to accommodate the variety of work on display, the event name was changed from The Big Art Show to The Big Arts Show in December 2015.