To commemorate 400 years since the passing of arguably the greatest play wright of all time, a Shrewsbury restaurant is hosting an evening of special food, drink and entertainment in honour of William Shakespeare.

The Drapers Hall Shakespeare Banquet will be held on 23 April, the date of his birth and death. The six course menu will be based on medieval fayre such as squire’s broth of vegetables with trencher bread and spit roasted royal beef all washed down with ale and wine. Seated and served on long banqueting tables diners will also be treated to recitals, readings and music from some of the Bard’s famous speeches, sonnets and songs, by actors and musicians from Shropshire Drama Company. A portion of money raised from ticket sales will be donated to Macmillan Cancer Support in Shropshire. The event follows a number of other activities taking place throughout the town during the day to commemorate the anniversary.

Records show that Drapers Hall dates back to 1485 and owner Sharon Huxley believes an event is perfect for the venue. She said: “This building is steeped in history and although we have held medieval banquets in the past, this one marks a very special occasion. It’s not every day we can celebrate William Shakespeare’s 400th birthday. The entertainment provided by the actors and musicians of Shropshire Drama Company will add an extra ambience to the evening, so… ‘If music be the food of love…..’”

The Drapers Hall Shakespeare Banquet starts at 7pm on Saturday 23 April. Tickets are £50, £5 of which will be donated to MacMillan Cancer Support and available from the Drapers Hall on 01743 344679 or online at www.wegottickets.com/drapershallshrews (a £3.50 booking fee is applicable). 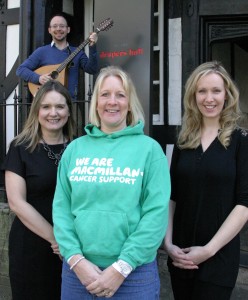