Following the success of the inaugural event in 2018, organisers of a Shropshire based ukulele festival have confirmed the dates and main act for this year’s event.

Phil Doleman regularly tours throughout UK and has played festivals in the USA, France, Germany and Finland.  He has appeared on over 20 albums, on BBC radio and TV and performed with award winning musicians. He writes a regular column in Uke Magazine and is the author of the book How Music Works On The Ukulele. His love of vintage blues, hokum, old-time and jug band music when he blows the dust off obscure old tunes with his intricate picking and driving rhythms on both resonator ukulele and five-string banjo. In addition, his original songs blend perfectly with the classics. Blues Matters Magazine described him as ‘massively entertaining’.

Commenting on this year’s festival, Shrewkfest co-organiser Dave Cowton said: “Last year’s event proved very successful with some great performances by individual artists, bands and orchestras from Shropshire and beyond.  So this year we decided

to extend the event by adding an extra evening of entertainment and securing the fantastic talent of Phil Doleman, along with other well-established acts. Shrewkfest is aimed at people who can play the ukulele and enjoy joining in on the sessions as well as those who just enjoy good live music in a festival setting.”

Tickets prices for Shrewkfest at Eastridge Farm, Habberley begin at £13.50 for the weekend, and are available to purchase online at www.shroprock.co.uk/shrewkfest#tickets. It is free to attend for U16s and discounts are also available for block bookings. For more information email shrewkfest@shroprock.co.uk. 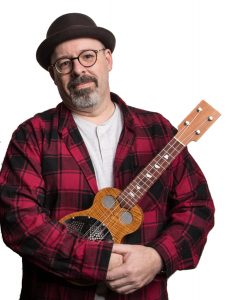