A Shropshire recycling and resale centre has recorded its most successful for apprentice appointments and is currently providing advice on the framework for a new, potentially UK-wide, domestic appliance repair apprenticeship.

Reviive, which operates across three sites in Shropshire; Oswestry, Shrewsbury and Telford; and one in Chester, has employed apprentices since it was established in 2010. However, in the financial year ending April 2015 it provided 14 apprenticeship opportunities, as well as 22 volunteer and nine jobcentre placements, 19 of which went on to secure full time employment.

One of Reviive’s success stories is Jason Stubbs. 23-year-old Jason is the front-of-house salesperson at the Shrewsbury showroom and recently won Achiever of the Year at Shrewsbury based SBC Training‘s annual award evening. Originally taken on as a volunteer to gain work experience and then following a brief spell at a call centre, Jason returned to Reviive where he completed a warehousing and storage apprenticeship. Having transferred to the showroom, he is now looking to start a customer service qualification.

Linda Johnson, trainer-assessor at SBC Training, responsible for Jason’s development while undertaking his apprenticeship said: “Working with Jason has given me great satisfaction. His commitment and drive was realised when he attained the full apprenticeship, which has provided him with the belief that he can progress to achieve further qualifications and hopefully inspire other apprentices at Reviive.”

In addition Reviive has registered with and placed its support behind the Shropshire Star’s Ladder for Shropshire campaign, which actively encourages young people to apply for and businesses and organisations to consider creating apprenticeship positions. Reviive will be increasing its offer soon with the introduction of a new consumer electrical and electronic products apprenticeship, which relates to the work it carries out on the repair, maintenance and reconditioning of white goods donated to the organisation such as washing machines, fridges and freezers.

Julie Hotchkiss, retail manager at Reviive, said: “We are very excited about being involved in the development of this brand new domestic appliance repair apprenticeship which will be the first of its kind in the UK, as well as Ladder for Shropshire, which we are sure will help to maintain the positive profile and importance of apprenticeships in fulfilling Shropshire’s skills needs, whether it be as an individual interested in becoming an apprentice or a business looking to take one on.” 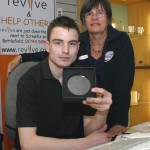 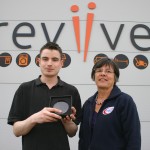 About Reviive
Reviive was established in 2010 by two Shropshire based charities – Shropshire Housing Alliance and South Shropshire Furniture Scheme. It has four centres, three in Shropshire at Oswestry, Shrewsbury and Telford and one in Chester. The Chester centre is a member of Cheshire Furniture Re-use Forum.

Reviive is a social enterprise or community interest company (CIC) and its aims are to directly help young people and the long-term unemployed with opportunities to work in a supportive environment and learn and grow in confidence so they can enter the job market in a stronger position. It also fulfils a number of other objectives as part of its function as a social enterprise and supports Cheshire West and Chester Council’s (CWCC) HELP (Help in Emergencies for Local People) scheme, which provides furniture and household items to individuals and families in exceptional need and is a member of the Cheshire Re-Use Furniture Forum.