Reviive to support SDC in forthcoming production of Bedroom Farce

Reviive will provide three beds and a selection of furniture, and recently offered its Shrewsbury store as a location for a promotional photo shoot.

Directed by Jonathan Cross, his first for SDC, Bedroom Farce is a comedy set in the 1970s. The events of the play revolve around the up and downs in the lives of four related couples – parents, neighbours and ex-lovers – over the course of one autumnal night. Ernest and Delia are going out for their annual wedding anniversary meal at the usual restaurant; newly-weds Kate and Malcolm are looking forward to their house-warming party; party guest Jan is on her way, leaving husband Nick confined to bed with a bad back. Crashing into this scene of apparent domestic harmony come Trevor and Susannah, in the throes of a tempestuous marital eruption, and determined to impose their multiple miseries on their friends. As they roam between the bedrooms of the three houses they leave havoc and disarray in their wake.

Jonathan Cross said: “The action requires three contrasting bedrooms in three separate houses to be simultaneously accommodated on the stage.  With the invaluable help and support of Reviive we hope to achieve a visually interesting set which will provide just the right background for SDC’s presentation of this hilarious play. Rehearsals are progressing well and it is a play in which Alan Ayckbourn’s superb script captures the various characters’ flaws and nuances and the hilarity that ensues from the confusion and chaos.”

Julie Hotchkiss, retail manager at Reviive, said: “We are very happy to support SDC in providing bedroom furniture and fittings from our large and varied selection and we wish the cast and company a successful production.”

Bedroom Farce runs from Wednesday 08 to Saturday 11 November at Theatre Severn’s Walker Theatre. Tickets are £16 and £14 (students), available through the box office (01743 281281) and online at www.theatresevern.co.uk/shows/drama/bedroom-farce/

Picture: Members of the cast from Bedroom Farce. 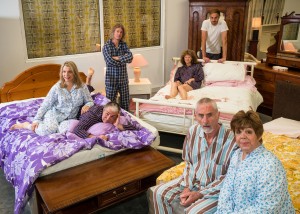