A Shrewsbury primary school has won a prize for collecting the most waste electrical and electronic equipment (WEEE) for recycling.

Organised by Veolia in partnership with Shropshire Council and Reviive; representatives from which recently presented a cheque for £200 to Harlescott Grange Primary School; the Shropshire-wide competition encouraged children to take broken or unwanted electrical items such as toasters and hair dryers to their school for recycling, instead of throwing them away.

Over 4,100 children from 16 schools took part and nearly 3,600 kg of unwanted electrical items were collected in total. Harlescott Grange Primary School’s contribution was 1227 kg, 3.37 per pupil.

Julie Hotchkiss, retail manager at Reviive said: “This was a fun competition but with a serious message about the potential of recycling and reducing landfill that we hope young children can benefit from. Everyone at Harlescott Grange Primary School should be congratulated as their final tally of recycled products was absolutely fantastic. Even though it was the heaviest collection, the number of children at the school meant the per-head total was less than the winning entry, but a worthy and well-earned second place.”

Clement Gaubert, Veolia WEEE scheme manager said “We are delighted to have worked with Shropshire Council and Reviive on this initiative. We believe the competition has been a great success and has helped raise awareness among the young people about the benefits of recycling their electrical waste.” 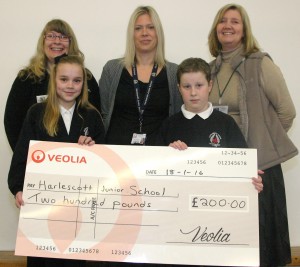 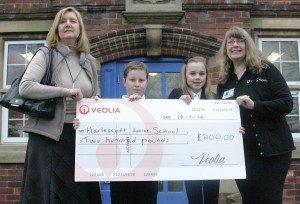 About Reviive
Reviive was established in 2010 by two Shropshire based charities – Shropshire Housing Alliance and South Shropshire Furniture Scheme. It has four centres, three in Shropshire at Oswestry, Shrewsbury and Telford and one in Chester. The Chester centre is a member of Cheshire Furniture Re-use Forum.

Reviive is a social enterprise and its aims are to reduce landfill while directly help young people and the long-term unemployed with opportunities to work in a supportive environment and learn and grow in confidence so they can enter the job market in a stronger position.

About Veolia UK
We are committed to protecting the environment and improving the lives of the communities in which we operate and have been awarded a Queen’s Award for Enterprise in Sustainable Development and received a Four Star rating in Business in the Community’s Corporate Responsibility Index for 2015.

Veolia group is the global leader in optimised resource management. With over 179,000 employees* worldwide, the Group designs and provides water, waste and energy management solutions that contribute to the sustainable development of communities and industries. Through its three complementary business activities, Veolia helps to develop access to resources, preserve available resources, and helps to replenish them.