Rehearsals have started and tickets are now on sale for Shropshire Drama Company’s (SDC) forthcoming production of Arthur Miller’s post WW2 classic All My Sons at Theatre Severn, which takes place from 09 to 12 November.

All My Sons is set in the immediate post WW2 period. All the action takes place in the back yard of Joe and Kate Keller’s home in small town America.  After the tumultuous events of the war years life has apparently settled back into a normal pattern until one particular August weekend when their world is turned upside down.  An overnight storm seems to set off a chain of events which raise questions about moral conscience and family interest during wartime and the consequences that follow.

This is the second Arthur Miller production by SDC, the first one being the well-received performance of A View From The Bridge in 2009.  Director of All My Sons,

Rosalind Garrard said: “This play was first performed in 1947 in New York and was Miller’s first major success as a dramatist.  At its heart is the issue of the conflict that exists between every man’s responsibility to his family and his wider moral responsibility to his fellow beings.  All the characters, to a greater or lesser extent, are affected by the consequences of the morality of the choices they have made.  Despite the setting of post WW2, this powerful and gripping story has a message for everyone.  The audience are left with the uncomfortable question ‘what would you have done in the same dilemma?’”

Performances start at 7.30pm and tickets for All My Sons at Theatre Severn are £16/£14 (students) which includes a £1 booking fee and available through the theatre’s box office on 01743 281281 or online at www.theatresevern.co.uk/shows/drama/all-my-sons. Discounts are available for block bookings of ten people or more.

1 All My Sons poster

2 Helen Bryant and David Wright as Kate and Joe Keller. 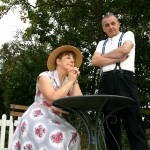 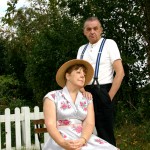 In previous years SDC has staged the following productions: Henry IV (Part One) in Haughmond Abbey as part of the Battle of Shrewsbury 600th Anniversary Commemorative Festival, The Lion In Winter at the Edge Arts Centre, King Lear, All’s Well That Ends Well, King Richard III, Romeo & Juliet, The Merry Wives of Windsor and The Taming Of The Shrew at Much Wenlock Festival, Inherit the Wind  in St. Chad’s Church as part of Shrewsbury’s Darwin Festival, A View From The Bridge at Concord College and Ellesmere Arts Centre, as well as She Stoops to Conquer, Hay Fever, Creditors, An Inspector Calls, The Accrington Pals and As You Like It at Shrewsbury’s Theatre Severn.