As a prelude to its forthcoming production of Peter Whelan’s WW1 drama The Accrington Pals, Shropshire Drama Company (SDC) has organised a WW1 exhibition at Theatre Severn.

Currently on show in the theatre’s foyer and compiled by Robert Elliott of the Shropshire Council Visitor Information Centre, Shrewsbury it comprises a display of family pictures and stories submitted by the cast and other SDC members relating to The Great War.

Commenting on it Robert Elliott, who is also a member of SDC, said: “We weren’t really sure what to expect when the initial request went out but the response was great. The display highlights how families from Shropshire, the UK, and in one case Poland were involved, the contributions their men and women made who signed up and how they were subsequently affected by the conflict. My grandfather survived the war but his brother unfortunately did not, falling at the Battle of Bellewaerde in Belgium during 1915, aged only 17. He died from mustard gas poisoning. Another story tells of WW1 survival only to be lost in the cruellest of circumstances during WW2.”

The free exhibition runs from now until the final performance of The Accrington Pals on Saturday 15 November. 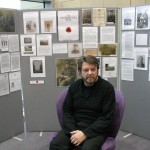 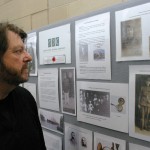