Tickets sell out for Shrewkfest 2019

Organisers of a Shropshire based ukulele festival have announced that the event is now sold out.

Co-organiser Dave Cowton said: “The fact we have sold out is great news and very positive considering it’s only the second year of the festival. However, while there is no space for any more food stalls, there are still pitches available for people or organisations wishing to sell arts and crafts, as well as display information. For example, we are excited to be joined by Shropshire Wildlife Trust this year. We have also adopted a pirate theme and look forward to seeing some extravagant costumes and hearing pirate-speak in the hills of Shropshire, a totally land-locked county!”

For more information about potential pitches for stalls contact Dave Cowton by email on shrewkfest@shroprock.co.uk. 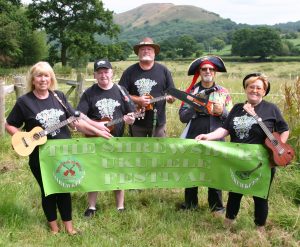