There was much patriotic fervour after Britain entered WW1 in August 1914, and men enlisted and with high spirits marched off in their thousands to fight for king and country with the firm expectation that the war would be over in six months. In several towns they were encouraged to join up with their friends to form the well-known pals’ regiments, in the belief that fighting alongside each other would provide support and a sense of camaraderie. There was no inkling of the horrors that lay ahead.

Describing the background to the play, Rosalind Garrard said: “Accrington in Lancashire was a typical English town where a pals regiment was raised and then subsequently and tragically annihilated in the trench horror of the Somme. Although the characters are purely fictitious, the action in The Accrington Pals is based on historical fact and accounts from Peter Whelan’s own family. At times funny, at times sad, it provides an insight into how both men and women were affected by the monumental events of the ‘war to end all wars’. Nothing would ever be the same again.”

SDC offers The Accrington Pals as a tribute to all those who suffered so much in the war and its aftermath. During the four nights of the play The Royal British Legion, formed shortly after World War 1, will be taking a collection in the theatre foyer, contributions from which will go towards the unending and committed work it carries out to support not only the forces’ personnel, but also their families.

Peter Whalley, interim regional fundraising manager – Midlands at The Royal British Legion said: “It is important, in this centenary year, that we remember the sacrifices made by the troops that are typified in this performance of The Accrington Pals. The work we do now is just as vital as it was in the years following WW1 and we are delighted that SDC has chosen to support us. The money raised at our collections will go towards the £1.6 million we spend every week providing lifelong support to our armed forces and their families.”

Performances start at 7.30pm and tickets for The Accrington Pals at Theatre Severn are £12/£10 (concs) and available to book through the theatre’s box office on 01743 281281 or online at www.theatresevern.co.uk/shows/drama/the-accrington-pals/. 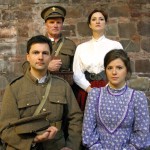 About Shropshire Drama Company
SDC is an amateur company whose aim is to bring challenging and innovative theatre to the people of Shropshire and was originally founded by the former county drama and arts adviser the late Bert Amies, OBE.

In recent years SDC has staged the following productions: Henry IV (Part One) in Haughmond Abbey as part of the Battle of Shrewsbury 600th Anniversary Commemorative Festival, The Lion In Winter at the Edge Arts Centre, King Lear, All’s Well That Ends Well, King Richard III, Romeo & Juliet, The Merry Wives of Windsor and The Taming Of The Shrew at Much Wenlock Festival, Inherit the Wind in St. Chad’s Church as part of Shrewsbury’s annual Darwin Festival, A View From The Bridge at Concord College and Ellesmere Arts Centre, as well as She Stoops to Conquer, Hay Fever, Creditors and An Inspector Calls at Shrewsbury’s Theatre Severn.