Early bird tickets are now on sale for Shropshire Drama Company’s forthcoming production of Terence Rattigan’s WW2 drama Flare Path at Theatre Severn, which takes place from 26 to 29 June and marks the end of the RAF’s centenary year.

Rattigan’s play is a tribute to the collective spirit of wartime bomber crews and their partners, and drew on his own wartime experiences as a gunner and Flight Lieutenant in Coastal Command.

Set in the residents’ lounge of a small Lincolnshire hotel during 1941, a place where the RAF pilots and crews would ‘hang out’ before and after raids, the core of the play concerns a personal dilemma between three characters – Peter Kyle, a successful Hollywood actor whose star is about to wane, his former lover the young actress Patricia Warren and her husband Flight Lieutenant Teddy Graham DFC.

Although it was Patricia who initiated the break-up with Peter, she finds that she still has strong feelings for him, and his unexpected appearance at the hotel forces her to face up to the conflict of her emotions and decide who needs her more – the former lover who is afraid of what his future holds or her pilot husband, whose breezy manner is a veneer to cover his shattered nerves.

Commenting on the play, director Rosalind Garrard said: “Flare Path was first performed in 1942 in London at a time when there was constant attack by enemy aircraft, but nevertheless it drew large audiences who felt a close affinity with the characters in the play and it enjoyed a long and successful run.  The plot reveals how the contained emotions, typical of the British at that time, underpinned the strength of the air crew who routinely risked their lives on every mission, as well as those who remained behind.  The story also shows up what love and loyalty can really mean in what were extraordinary conditions”.

Performances of Flare Path start at 7.30pm in the Walker Theatre at Theatre Severn and early bird tickets are £14 up until 01 May and will remain the same price for all armed forces personnel, students attending on Wednesday 26th and Thursday 27th June only, and block bookings of ten or more people. After that date all other tickets prices are £16. To book contact the box office at Theatre Severn – telephone 01743 281281 – or order online at https://www.theatresevern.co.uk/shows/whatson/flare-path 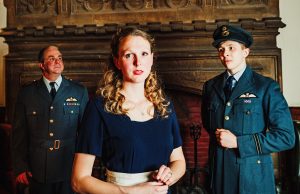 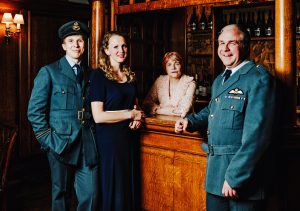 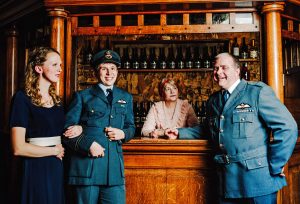