The Big Art Show, an annual Shropshire based event successfully launched in 2014, has secured world renowned artist Andrew Logan as its new patron.

Held at the County Showground in Shrewsbury during the first weekend of July, The Big Art Show aims to provide a showcase for a variety of artists working in all formats and media including paint, sculpture, jewellery, glass, ceramics, furniture design, photography and performance. 2015’s event will host over 150 exhibitors, a real ale bar, eateries and live music, as well as workshops and talks given by the artists.

Qualifying as an architect in the late 1960s and having worked in decoration, stage design, drama and opera, Andrew Logan is still one of Britain’s principal sculptors. Although Logan’s art can be found in public and private collections all over the world, in 1991 he established a museum dedicated to his own work located in the village of Berriew, near Welshpool.

In 1972 he established The Alternative Miss World, which he still organises. Derek Jarman’s early film-making documented the social scene surrounding Andrew Logan and his studio at Butler’s Wharf, London, where Malcolm McLaren and Vivienne Westwood staged the notorious Valentine’s Ball in 1976, from which The Sex Pistols were introduced to the world.

Commenting on Andrew Logan’s patronage and The Big Art Show 2015, organiser David Dawkins said: “We are really pleased that without hesitation Andrew Logan has agreed to become a patron. He is a well-known and well respected artist who also carries a lot of kudos and I hope his patronage will encourage others to exhibit. Andrew will be exhibiting his work, as well as holding one of his famous cat-walk jewellery shows. We received very encouraging feedback from artists and attendees at last year’s event and look forward to 2015 being even better.”

Exhibition packages for The Big Art Show 2015 start at £60 for graduates and £160 for more established artists. Further information is available to view at www.thebigartshow.co.uk/call-for-artists. 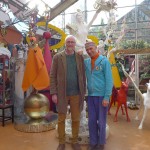