Acclaimed Canadian indie-folk music band The Fugitives return for a three-week tour of England and Wales from the end of September.

Based in Vancouver, they bring brilliant musicianship, top-notch song-writing, complex vocal harmonies and a funny, uplifting vibe to their live performances. Described as ‘the missing link between Leonard Cohen and The Pogues’, they have been nominated for Best Vocal Group at the Canadian Folk Music Awards, Best Roots Album at the Western Canadian Music Awards, opened for Canadian folk icon Buffy Sainte-Marie and also played a slot at Glastonbury Festival as part of their UK tour in 2014.

Since their last visit in 2015, the band have recorded a new album entitled The Promise Of Strangers, which will be on sale at their concerts, and singer Adrian Glynn who is also an accomplished actor, recently starred in his first full length feature film: Volition. Supported in some areas by rural touring scheme initiatives, the forthcoming shows follow a successful tour of Europe in the spring of 2017.

Commenting on the forthcoming tour Brendan McLeod, spokesperson for The Fugitives, said: “We had a blast the last time we were in the UK and performed to very appreciative audiences. However, apart from the fantastic reception and friendly promoters, the real reason we’ve decided to return is because of the beer. We imbibed some particularly appealing brews last time and made a point of remembering them. In fact, we’re playing some of the same locations again so we can reunite our taste buds with a decent pint!” 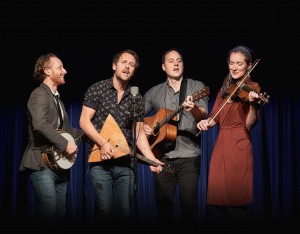 2 Adrian Glynn and Brendan McLeod from The Fugitives.