The highlight of SICF will take place at Theatre Severn on the evening of Sunday 17 July. The festival will also include performances from other comedians at multiple venues throughout Shrewsbury.

Described by The Yorkshire Post as ’One of those comedians who makes you realise the power of stand-up comedy and the respect it deserves as an art form’, Paul Sinha was born in the UK to Bengali parents and the family medical dynasty. While studying medicine in the 1990s, Paul took his first steps on the stand-up comedy circuit. He pursued both careers and at the 2006 Edinburgh Festival Fringe earned a nomination for the highest accolade in live comedy, the Edinburgh Comedy Award. Shortly after his nomination, Paul hung up his stethoscope to become a full-time comedian.

Paul is a familiar voice on radio with appearances on Radio 4’s Just A Minute and The News Quiz and on BBC Radio 5 Live’s Fighting Talk. His series Paul Sinha’s History Revision won the Rose d’Or for radio comedy. He has also appeared on television, namely BBC’s QI and Would I Lie to You? and as a competitor on Dave TV’s Taskmaster.

A lifetime of curiosity and learning not only informs Paul’s comedy but also ranks him now as one of the UK’s finest quizzers. This has led to yet another concurrent career as a general knowledge expert on the award-winning ITV quiz show, The Chase. He will be performing at SICF alongside Steve Royle, Gary Delaney, Seann Walsh and comedy duo Flo & Joan.

Festival director Kevin Bland said: “This is a great coup for Shrewsbury. Paul has been a top headliner on the circuit for years and I’ve tried several times to secure his appearance at the festival. Now he has agreed we are extremely excited to announce that Paul will be part of the 2022 Gala Show line up.”

Tickets for the SICF Gala Show on 17 July are £33.50 and available through the Theatre Severn box office 01743 281281 or online here: https://theatresevern.co.uk/shows/comedy/shrewsbury-international-comedy-festival-gala/ 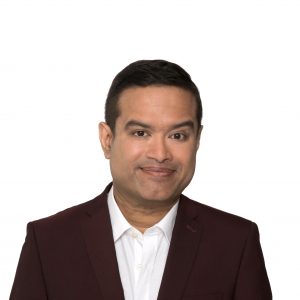