A Shrewsbury shoe repair and key cutting business is celebrating 36 years in the industry and the reopening of the town centre, following the lifting of Covid 19 lockdown restrictions, with a move to new premises.

Established in 1985 Shaun Walton attained his City & Guilds qualification in 1990 following a five-year apprenticeship. Previously based in the Pride Hill Shopping Centre, he has now moved the business to Roushill Bank and in an ironic twist, is next door to where well-known shoe repairer John Homden was previously located. Key cutting, fitting new watch batteries, repairing soles, heels, boot zips, adapting footwear for people with disabilities, and selling shoelaces, insoles and other accessories are all part of the offering from Walton’s Shoe Repairs. In addition, the business will now provide a weekly dry-cleaning service.

Contemplating on how things have changed during his time in the industry, and as one in only a handful of independent shoe repairers now left in Shropshire, Shaun Walton said: “Although the materials have evolved, such as the introduction of plastic and rubber soles and new glues, the skills and tools for doing the job, which I’ve adapted and applied to some strange requests during my time in the profession, have stayed the same. In recent years I’ve been asked to re-stitch a bra and even grind down a set of ill-fitting dentures!

With the prospect of a return to some semblance of normality now that a number of restrictions have been lifted, he continued: “Lockdown has been tough on retail in Shrewsbury, so I’m really looking forward to welcoming customers old and new to the Roushill Bank shop, and in so doing help to bolster town centre trade.” 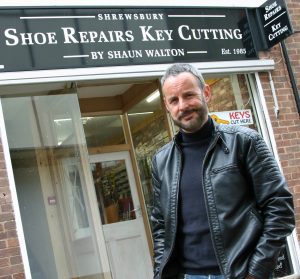